Irish alt-folk star Maria Kelly today announces that her debut album, ‘The Sum of the In-between’, will be available worldwide, on vinyl and on digital platforms, from Friday 15th October 2021 on VETA Music.

On Friday 12th November 2021, Maria will celebrate the release of ‘The Sum of the In-between’ with a headline show at The Workman’s Club, Dublin, presented by Singular Artists. Tickets are €15 incl. booking fee and go on sale this Friday 13th August at 10am from ticketmaster.ie.

Since the release of the album’s first single ‘Martha’ earlier this year, excitement has been building about ‘The Sum of the In-between’. Two further singles, ‘eight hours’ and ‘good enough’ elevated the Westport-born, Dublin-based singer’s forthcoming debut album to ‘potential album of the year’ heights.

Even before Maria had an album in the works, she was garnering praise from the likes of The Line of Best Fit (“…Kelly effortly balances the melodic whimsy of her folky vocal with the weight of her sparse, thoughtful songwriting”), Consequence of Sound (“…silky smooth vocals that spin widely relatable tales”), Wonderland (“From every angle, Kelly’s art is an immersive experience”) and Nialler9 (“poignant folk music at its very best”).

As we move towards the release of ‘The Sum of the In-between’’, a theme that emerges is one of acceptance and finding the strength to meet yourself where you are, wherever you are. Maria’s singles ‘good enough’, ‘eight hours’ and ‘Martha’ are deeply introspective and honest songs about her own mental health journey and the rest of the songs on this album continue that exploration.

Maria Kelly says: “The Sum of the In-between’ is an attempt to find the strength to confront the current version of myself at all costs. Not who I was, or who I hope I’ll be, but who I am at this moment – despite how uncomfortable that version may be to accept.

“It explores the deepest parts of my brain, and it celebrates the strength that can be found in the darkest of places. It’s also a thank you to my friends, who have got me through the worst of it, during times where I know they were battling with the very same things.”

With the world at a standstill, 2020 saw Maria retreating to a small cottage on the south coast of Ireland. During this quiet in-between, Maria has found space to write and record her eagerly anticipated debut album – a blank canvas and an open sea with which to take stock and reflect on her 20s so far. It was produced remotely by her long-time collaborator, Matt Harris.

“I made this album with Matt remotely, sending things back and forth, and experiencing the songs through my headphones,” she says. “They haven’t got a chance to live on a stage yet, so I can’t wait to bring this body of work to life with a full band on November 12th.”

Though introspective, Maria’s new record is inherently one that is designed to provoke not just thought and emotion – but also action. Her underlying message to the listener that ‘you deserve the right help and you deserve support’ comes through her music like a good friend who wants you to be well – but knows that gentle encouragement is the best method of persuasion.

Maria Kelly’s world of delicately woven alt-folk is laced with a sincerity that cuts to the bone. Finding comfort in the confessional styles of artists like Regina Spektor, Daughter, and Lucy Rose, she soon transferred her own introspections to music, developing a sound that is as delicate as it is disarmingly frank. 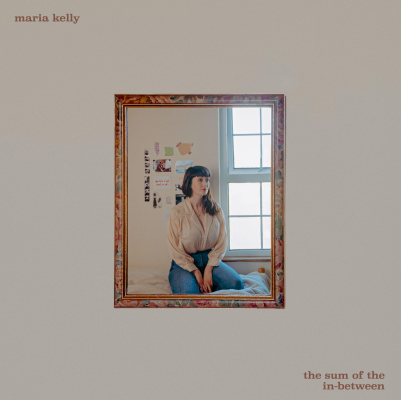