Stitches Comedy at The Workman’s Cellar with Eric Lalor

As a capable, flexible performer it is hard to pigeon hole Eric Lalor’s act. His warm, energetic onstage presence makes for an unforgettable experience for the audience. With gags that always hit the spot, his engaging, high intensity performances make him one of the top names of ‘must book’ comedians.

His first foray into comedy was a bit unusual. In 2006, as one of the participants of RTÉ Two’s Des Bishop’s Joy In The Hood, his first ever gig was filmed on his home turf of Ballymun in Dublin and broadcast to the entire nation. Des went to Ballymun in search of new comedic talent and discovered Eric. Des was so impressed with what he saw that he brought Eric on his record-breaking, nationwide Fitting In tour. Opening the show at Live at the Marquee in Cork, Eric performed to 5,000 people. Since then, Eric has gone from strength to strength and has now garnered a reputation in Irish comedy as a consistent performer, making him one of the most sought after acts in the country. His first year in the highly competitive world of stand-up comedy saw him win the Comedy Cellar and Capital Comedy Club’s Best Newcomer Award. Eric has since been crowned Irish Standup of the Year two years in a row by the readers of entertainment.ie.

Eric is a regular act at the prestigious Kilkenny Cat Laughs Festival, as well as playing the Electric Picnic, Galway Comedy Festival, Edinburgh Fringe, Portlaoise Halloween Howls and Iveagh Gardens Festivals as well as being invited to perform at the very first ever London Irish Comedy Festival in Oct 2012. He has also opened for some of the biggest names in Irish comedy including Tommy Tiernan, Des Bishop, Jason Byrne, PJ Gallagher, Andrew Maxwell, Colin Murphy and more.

In 2008 Eric wrote and performed his first solo show, The Lalorpalooza Show, which earned him rave reviews and a sold-out night at Axis, Ballymun. In 2009 he embarked upon his first nationwide tour with fellow comedian Andrew Stanley. He also toured with his second solo show, Here! No Evil which again was met with great reviews before teaming up with Gearóid Farrelly for The Chalk and Cheese Tour and being the warm up act for live TV including The Late, Late Show and Deal or No Deal. He has been a panelist on The Craig Doyle Show on RTE2. More recently, he has come to the attention of TV producers as an actor and played Cathal Spillane in Fair City. He won the Best Actor Award in the 2017 London Ealing Festival for his role in In The Valley of the Moon

Eric is a regular contributor to Joe.ie and presented the Euro 2016 Live with Kieth Andrews on Radio Nova.

“Excellent, bellyachingingly funny, fast moving.” KILKENNY PEOPLE “Flawless… It’s like Rab C. got Irish, got eloquent, but stayed scum”  CHORTLE UK “His vibrant, super energised stage presence connects with the audience… We’ve NEVER seen a crowd react so emphatically to one of our acts.”  LAUGHTER LOUNGE, DUBLIN “You know him as one of Ballymun’s Best! After appearing on Des Bishop’s Joy in the Hood—its been onwards and upwards! Who would have known such a comedy force would come out of one of Ireland’s toughest areas! One of Ireland’s finest talent’s—-A MUST SEE” THEINTERNATIONAL COMEDY CLUB “Inimitable and hilariously funny” EVENING HERALD “Keeps on improving. His joke construction reminds me of John Maloney” BARRY MURPHY, APRÉS MATCH “One of the things that I am most proud of is knowing that we helped Eric to his true calling. A pure natural” DES BISHOP

Shane Clifford is a comedian from Tralee, Co Kerry. Shane made his stand-up debut at the age of 30, having already been semi-successful making funny, sometimes strange videos, and putting them on his Facebook page ‘Shane’s Brilliant Page’. He has since become a fast rising comic on the Irish Scene – headlining shows all over the country and creating a successful cult podcast Shanes Brilliant Podcast

Emman is a strong name in the Irish Comedy seen, nominated for Irish Comedian Of The Year 2020 & 2021, Chortle Finalist 2019, and many other more awards, he has open for some of the big names in comedy and sports like Seann Walsh, Eric Cantona and more.

‘Emman Idama is a more effervescent source of energy, just the thing to keep the spirits up. Idama establishes himself as a warm, charming and thoroughly engaging performer.’ – Chortle 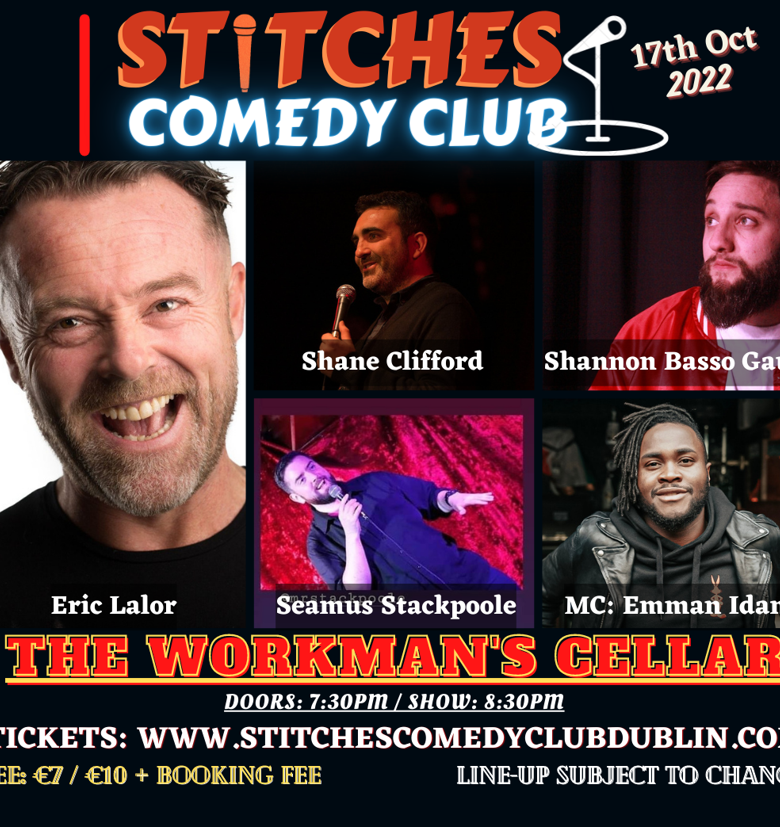