Fundraiser Supporting Rescue Services in Syria
In response to the crisis in Syria a small group of Irish bands have come together to put on a fundraising night this Monday, December 19th in The Workman’s Club. All the proceeds of the night will go towards funding vital humanitarian groundwork in Syria.
One of the co-organisers of the night, Dublin based music video director Bob Gallagher has this to say about the event.
“I think like a lot of people we were seeing the news reports and feeling horrified but also confused about what anyone can do. To keep watching it unfold at a distance on a screen feels morbid and brushing past it feels heartless, so in the early hours of Wednesday morning myself and two friends, Fia and James, exchanged a few messages to see if we could do something at short notice. By Wednesday evening we had a venue, a sound engineer and a line up. I think bringing people together for a night of music is a positive thing to do in itself and if that can raise even a little money it’s a great way of being active and getting a community together.”
The organisers will be working with Syrias Vibes, a Dublin based charity who are currently fundraising to put two new ambulances on the ground in Syria. Syrias Vibes was created by Dublin born DJ – Calvin James to support the civilians of Syria in their plight for freedom and safety.  They’re currently at 44% of their goal, with one ambulance expected to be active by next week. Organisers are hoping that a sold out show could help to make this a reality.
The night boasts a great line up from the Irish music scene that will include music from Paddy Hanna, Tandem Felix, Floor Staff, Participant, as well as DJ Set from Ben Bix of Meltybrains? and some special guests.
Show at 8pm and tickets are €10 on the door
You can also donate directly to the Syrias Vibes ambulance fund here:
https://www.justgiving.com/campaigns/charity/scoop/syriasvibesambulance
or to MSF (Doctors Without Borders) here:
https://www.msf.ie/syria
Keep an eye on the facebook event page for updates:
https://www.facebook.com/events/364501260581299/ 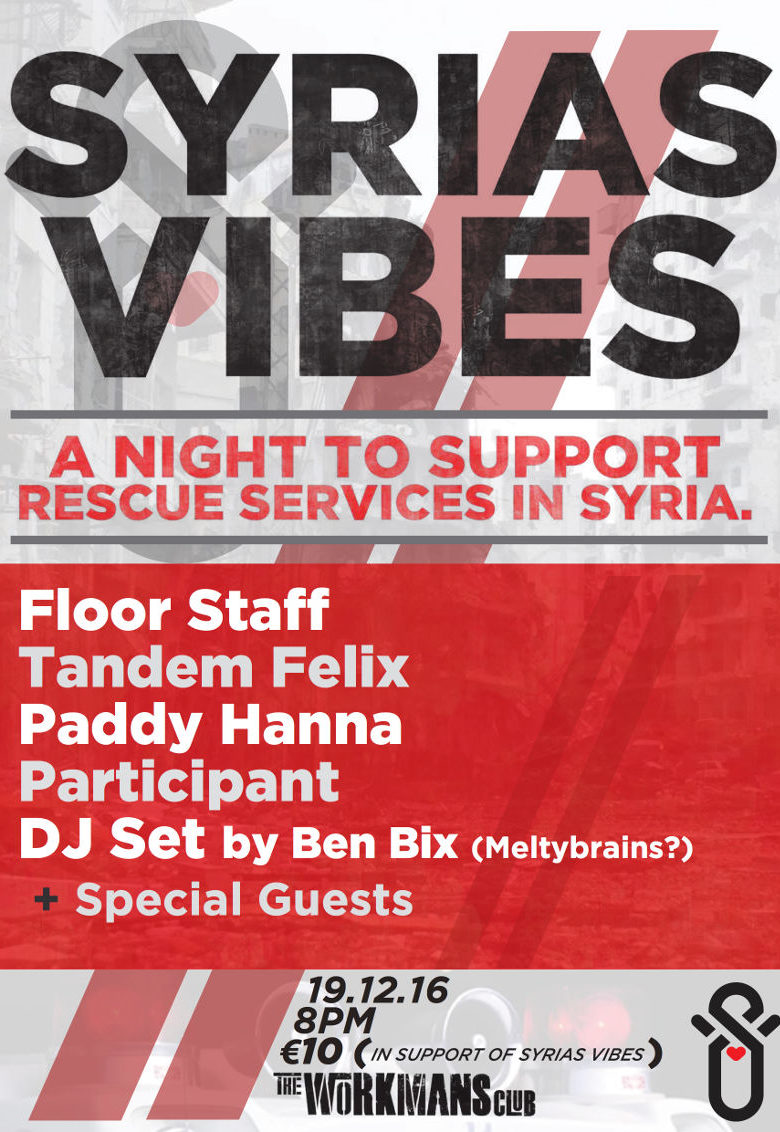