“Their brand of psychedelic oozes better than anyone’s.”
Record of the Day (UK)

The Brothers Movement’s self-titled debut album, released in 2009 on UK label Rocket Girl Records, captured a musical moment in time and cemented its place as an Irish cult classic.

This December, The Brothers Movement will reform for one night only to celebrate a decade since the release of that album, with a full-band show at The Workman’s Club, Dublin. Psychedelic indie-rockers Birds of Olympus and Dublin shoegazers Galants provide support on the night, making Friday 20th December an essential calendar date for indie-rock fans.

Due in no small part to their reputation for putting on incendiary, raucous live shows, The Brothers Movement toured Europe, the UK and the US both in their own rite and held their own as support for heavyweight indie-rockers such as Black Rebel Motorcycle Club, The Jesus and Mary Chain and Doves.

Made up of three brothers (Daniel Paxton, Neil Paxton, Conor Paxton) and three life-long friends (Andy Parkes, Derick O’Neill, Scott Glennon) from Dublin, The Brothers Movement were together for just three years (2007-2010), but in that time made a major impact, sharing billings with the likes of MC5, Chemical Brothers and Sonic Youth.

Born out of the ashes of the hugely successful band Mainline (“A real dirty, dark and powerful rock’n’roll band” – Hot Press, 2005), Entertainment.ie touted The Brothers Movement as the ‘Hard Working Class Heroes of 2008’. With influences ranging from The Beatles to My Bloody Valentine, and their sound recalling early Dandy Warhols, A Place To Bury Strangers and The Verve, RCRD LBL noted that the band was ‘boldly stepping into Richard Ashcroft’s battered trainers.’

The Brothers Movement showcased their talents at Oxegen (then Ireland’s largest music festival) as well as the Popkomm Festival in Berlin. Their March 2009 set at SXSW garnered additional industry buzz, with The Irish Times calling The Brothers Movement ‘hugely impressive’.

The Brothers Movement disbanded in 2010. Conor Paxton and Andy Parkes later played with psychedelic rock band, House of Dolls. Daniel Paxton went on to form Sweet Jane and, later, Buffalo Sunn. He has also released material as a solo artist under the name Daniel John Paxton.

Ticket-holders for this special, one-off show at The Workman’s Club in the band’s hometown can expect to hear The Brothers Movement album in full… and maybe some surprise tracks from this incredibly experienced band’s collective back catalogues. 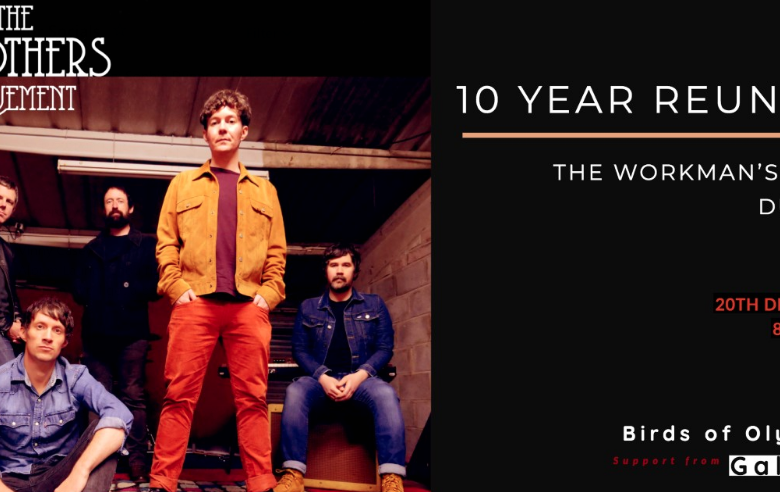