Waiting in line for your dignity”

Dublin-based five-piece The Choir Invisible have announced the release of new single Waiting Room, backed by a Workman’s Club headliner and promo video.

The single version of Waiting Room is the first offering from the forthcoming album About Last Night and finds the band in unusually amped-up form, straying into more radio-friendly territory than ever before.

“It’s easily the heaviest and wildest thing we’ve ever done – in fact, it hardly sounds like us at all and the guy who recorded it lost the masters before we could do the remix so now we’ve no choice but to impose it on people,” said Choir Invisible guitarist Felix LeMans.

“It’s for anyone who’s spent any of their life bored out of their mind staring up at a Sky News screen waiting to be called for some miserable and expensive appointment or other.”

“This is what we call the New York Mix,” said Choir Invisible singer Alan Noir. “In fact, some of it was done in New York. But we’re not telling people what part.”

The band will launch Waiting Room with a Dublin Workman’s Club headliner on Holy Thursday, March 24th, with patrons advised to enjoy themselves before the country’s nationwide ban on alcohol comes into force for Good Friday. Support comes from prolific Navan singer-songwriter Saramai.

The single is also accompanied by the band’s first-ever promo video, directed by Choir Invisible bassist Colm McDermott and available soon on YouTube.

About The Choir Invisible

The Choir Invisible have emerged from their hibernation…. A few months ago, in a borrowed caravan in the remote Burren region on the Atlantic seaboard, guitarist Felix LeMans finished writing The Choir Invisible’s new album, About Last Night. The first to be heard is the single version of Waiting Room, a raucous glam stomp of distressed guitars and sleazy organs, as singer Alan Black forces the issue: “It’s the saddest thing you’ll ever see/Waiting in line for your dignity.”

With new members and new sounds, the time has come to bring things to the stage and carefully prepare their debut album. It consists of ten new pieces, each radical in its own way, each with a sense of purpose and subversion and theatre: one a gigantic wall of sound arranged around four minutes of dialogue, another a work of elaborate orchestral surprise. But enough of that for now. The arrival of their new single, Waiting Room, indicates a band entering a whirlwind phase of energy and creativity: the wait is over. 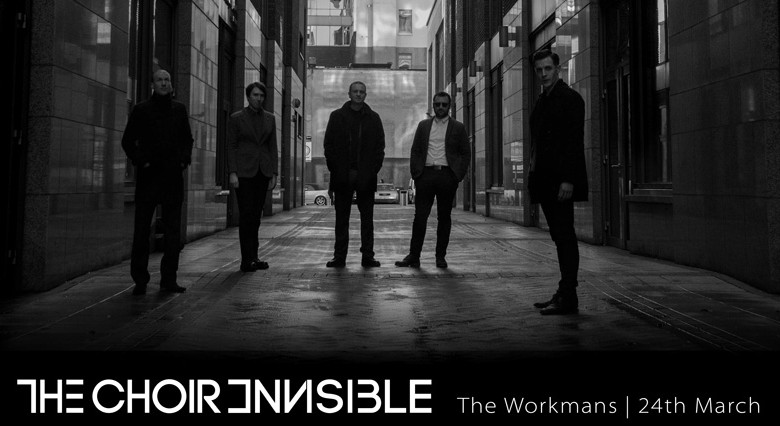