Our 2nd 2-nighter features a host of quality acts across all genres, from the opening cool of Conor Ward on Thursday to the sizzling closers Hot Cops on Friday. Throw in your two favourite primate acts in Ape Rising and Gorilla Troubadour, the alt-country stylings of Scott Williamson & the Wild Cards, the insanely talented sets of hands that belong to Badhands, and the intriguing Any Anything, who are everything you always wanted but were afraid to ask.

4-piece funk-rockers Gorilla Troubadour headline. Relative newcomers to the scene, they have quickly emerged as an exciting and explorative outfit who neatly straddle the boundaries of both genres. Early appearances in venues such as Rathmine’s The Bowery had audiences bouncing from foot to foot, and the invitations to return soon followed, culminating in a slot at the Gael Force festival with CC Brez, Bicurious and Crow Black Chicken. The single ‘The Apple Truck’ has received widespread radio play and hints of a unique sound. Their first Gigonometry appearance ends a run of appearances in their native South-East.

Fellow primates Ape Rising make the trip from Cavan to perform material from their superb eponymously titled album. Described as ‘music you can send men to space to’, the musicianship evokes prog crossed with 80’s synth, and coupled with evocative lyrics and ethereal vocals and harmonies the songs will dig deeply into any music lovers musical muscles.

Scott Williamson is a Dublin based singer songwriter and graduate of BIMM. The 23 year old along with his band ‘The Wild Cards’, blend Americana Folk Rock vocals with pop elements to create a unique sound that stands apart from the crowd.

Inspired by some of the great story tellers of the rock scene, such as Tom Petty, Bruce Springsteen and Ryan Adams, Scott has developed his own take on the genre. Scott and his band The Wild Cards have proactively been expanding their fanbase gigging across the country in venues like The Button Factory, Whelans, The Sugar Club, as well as The Academy supporting artists such as singer-songwriter Tyler Hilton (One Tree Hill, Walk The Line) and Charlie Simpson (Busted/Fightstar).

Conor Ward is a singer/songwriter from Co. Mayo, who has supported the Ryan Sheridan, Hermitage Green and Ham Sandwich to date. He released his debut single, “Stuck”, in early 2017 and has just released his debut 4-track EP, “Wanderlust” including a duet with the gifted Emma Langford. His music is a mix of upbeat catchy pop songs with melancholic acoustic ballads. The EP has received radio play on a multitude of stations (Today FM, iRadio, Red FM, Spin, KCLR etc.) and has been featured in Hot Press Magazine as one of Ireland’s Rising Acts. He recently packed out his own headline show in Whelans. 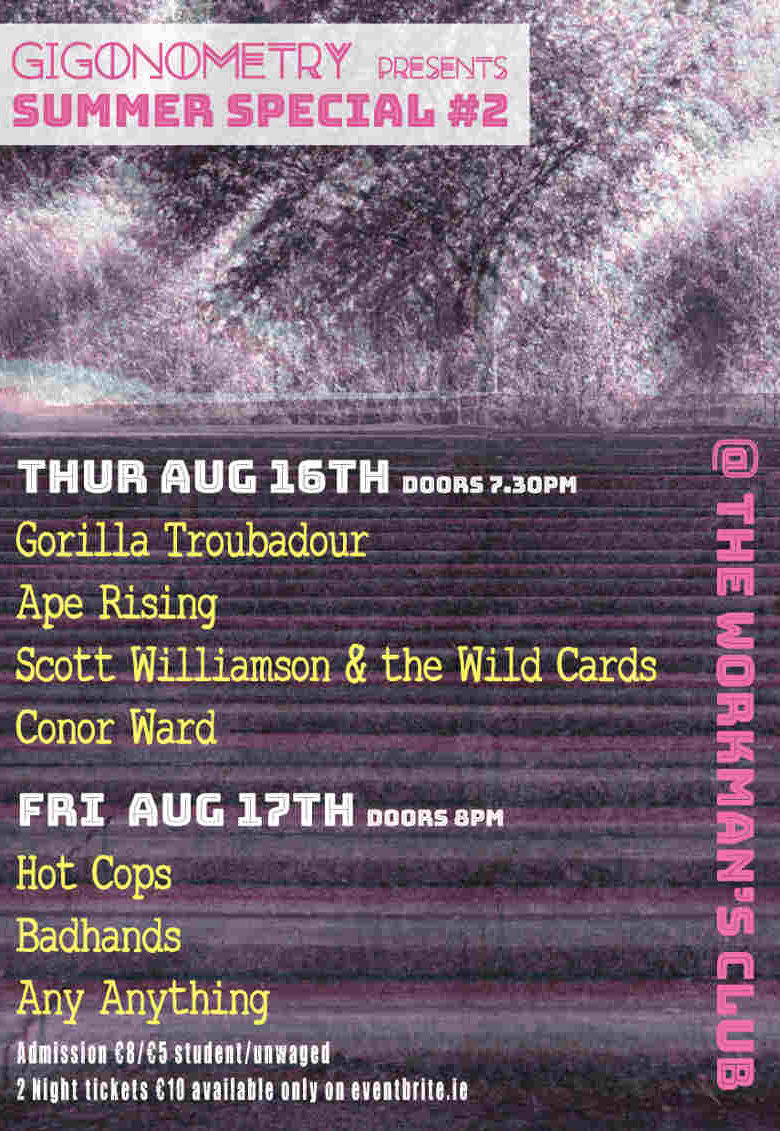