The Ground Will Shake

Hailing from Dublin and formed in 2013 The Ground Will Shake are Gavin Healy, Paul

– followed by ‘MELMOTH THE WANDERER’ in 2014. Following a successful appearance at

begin recording their début album. The eponymous titled album was recorded and mixed

with the joint production crew of Irish Punk pioneer Pete Holidai and Gavin Glass. The album

tune that doesn’t waste any time hanging around”

“The GroundWill Shake is a constructed record. All the pieces fit and all ofthem have a

purpose for one reason or another. The album’s pop sensibilities shine through and

natural to both the here and now, and isn’t thatwhat music is really about?

local and national media of late. They have just released their second album ‘Graffiti Reality’

on their own label ‘Demeanour Records’. Graffiti Reality is the follow-up to 2013’s critically

being nominated for several awards in Ireland, and attracting attention from both the UK

and US. Neon Atlas have drawn comparisons with Silver Sun Pickups, Teenage Fanclub, and

Act for the month of July 2015, their albumwas 2FM ‘The Alternative – Album ofthe Week in

“Hard to beat a solid, catchy riff –and that’s what helped bury this oneinto our brains.

BBC ACROSS THE LINE

When singer Elaine first met Chris a fruitful writing partnership began. After a flurry of

recording the band released their debut single ‘Photograph’. With a line-up solidified in

by infectious alternative hooks, driving beats and a standout voice. Follow up single, the high

more releases for later this year.

“Each tune in the set is different, no filler, great breakdowns, with subtle changes in direction

to keep the audience’s attention, but never trying too hard” – 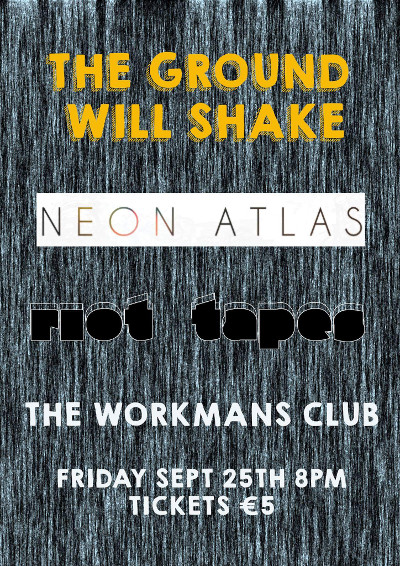