There’s nothin’ shnakey about what we’ve got in store for you this Paddy’s Day. Paddy’s Day is on a SATURDAY this year, so we all know what that means, amirite? Monday OFF. That means THREE nights of brilliant live bands, deadly DJs, Karaoke lols, 6 bars and NO EUROS. That’s right, we ain’t charging you a bean to get in. It’s what St Patrick himself would have wanted.

Let’s fill you in on what’s going on:

Friday night, check out some savage live bands, hear amazing DJs, treat yourself to some cold beers or cocktails at our place, have a lie in on Saturday and then come back to ours to do it ALL OVER AGAIN. Sunday? Is the party still on? YOU KNOW IT! Get back into us for day 3 of patriotic craic, because Monday is a banker.

DEAR ST PATRICK, WHO CAN I SEE LIVE AT THE WORKMAN’S CLUB?

THUMPER – This gang have been labelled as one of the most exciting live bands in Ireland, and for good reason. You won’t forget their live performances. Come see ‘em NOW.

OTHER CREATURES – This Irish trio have bags of ‘tude,  jagged guitar chords, thunderous drums and a setlist rammed with infectious indie gems. Sound!

MONTAUK HOTEL –  Indie- shimmer pop group based in Dublin. Their sound is influenced by the early 80’s indie-pop and they’re making waves with their throwback guitar sounds.

SILVERBACKS- Dublin-based band 5-piece band, whose music is in the field of slacker indie and noise-pop. Deadly!

THE SWEDISH RAILWAY ORCHESTRA – is an electronic music project, led by Dubliner Rob Smith – it’s a project which indulges in alternative dance and chillwave.

JOEY GAVIN- Dublin based, psych-folk, Joey Gavin is a songwriter and member of noise pop outfit (and Workman’s Club Paddy’s headliners, Thumper.) Joey’s current single, ‘The Hunt’ captures the lush, oneiric play of psych folk and soft rock he has been purifying over the past decade.

THE MURDER CAPITAL – James McGovern is a Dublin based musical outfit that utilizes the tropes of rock and roll for a dynamic and emotive performance. Expect an impassioned, primal and raw performance!

SPONGEBOB EYELASHES- savage name, savage band.. The lads released their debut EP last May. The 5-piece indie rock band never fail to lash (like what we did there?) some quality tunes.

VLLNS- VLLNS are a three-piece band from Dublin, Ireland who’s roots are firmly set within the sounds of Blues Rock, and Alternative Rock.

DEAR ST PATRICK, WHEN THE LIVE MUSIC IS DONE WHAT ELSE IS GOING ON?

For timetable and day by day breakdown, keep yer beady peepers peeled on our Twitz / Facey AND our brand new INSTAGRAM 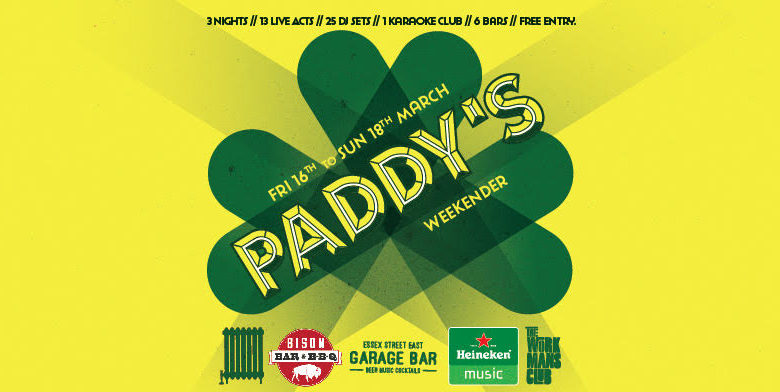