At The Liquor Rooms

On Friday, 16 June our Main Venue headliner at The Workman’s Club is the one and only Katie Kim! Katie Kim is the pseudonym of Irish singer Katie Sullivan, who performs slowcore, ethereal, ambient folk/pop. Her third full length album entitled Salt was released on October 2016 and was shortlisted for this year’s RTÉ Choice Music Prize Irish Album of the Year. She has toured all over Europe, and played shows in New York, Canada – and even a performance with The Waterboys on the legendary  Later with Jools Holland TV show. Joining her as support on the night is the wondrous Aoife Nessa Frances, a Dublin born musician and singer-song writer, who after previous musical collaboration, is making her entry into solo performance. Inspired by the poetic styles of folk music and psychedelic rock, she will be playing solo guitar and singing.(Doors 8pm) Afterwards, why not stick around for some infamous Workman’s Club DJ shenanigans – til late!

We’ll be kicking off Saturday at on our Workman’s Club Terrace, where we’ve got lots in store for you. We’ve got some amazing acts coming to play our acoustic stage for your afternoon delight from 2pm! We’ve got the deadly Claire Z and the mega Alex Smyth bringing you their musical stylings, with more to be announced! We’ll also have some very special and very fun tricks up our sleeves, so stay tuned! Plus, for those of y’all that love whiskey, and for those of y’all who’d like to know more about whiskey – why not join us in Bison Bar & BBQ at 1pm for an awesome whiskey tasting session? Bison serve up over 150 whiskies and our lads know everything there is to know, so why not come along and sample some fine drams? Email info@theworkmansclub.com to sign up. Plus, it wouldn’t be a proper Wellington Weekender without our famous Bison Hot Wing Challenge. This was tremendous last year. There were tears, laughter and a whole load of wings coated in the hottest sauce a regular human can withstand. Our chefs take this very seriously and lash the wings in sauce that is HOT HOT HOT! The challenge kicks off in Bison Bar & BBQ at 2pm – sign up in advance info@theworkmans.com or rock up on the day if you’re feeling brave!

Later that night – 8pm to be exact, get ready to bug out to the awesome Belfast quintet Pleasure Beach, who’ll be headlining our Main Venue at The Workman’s Club on Saturday, 17 June! This gang have recently released a new single ‘Burning Up’, which follows up last year’s ‘Magic Mountain’, and the Choice Song of the Year nominated ‘Go!’, which has now notched up more than 1 million plays on streaming services around the world! They are fresh from ripping it up on stages across the country, both their own headliners, and opening for Bell X 1 on their sold out Olympia dates. We love this band, we know you will too! There will be some special guests joining them on the night -stay tuned to our twitter and facebook for more! (Doors 8pm)

Also on Saturday night, in our subterranean den of delight, The Liquor Rooms, the magical Katie Laffan will be taking to our beautiful stage. Katie’s lo-fi bedroom funk pop has seen her swiftly become ‘one to watch’ and she’s graced the stages of Cork Jazz, Electric Picnic, Body & Soul and Other Voices in Dingle, to name a few (Doors 8pm) If sipping cocktails and relaxing is your vibe, why not stay and check out the awesome DJ Andy O’Connell as he spins some serious tunes for ya!

On Sunday, we’ve got a few treats for you up our sleeves! Have you ever felt that guilty and salacious urge to play BINGO? Well, now you can play it “ironically” at Hipster Bingo – in our Main Venue at The Workman’s Club. This includes (but is not limited to) laughing, bingo, games and existential dread. The bearded wonder, Irish comedian of the year Steve Bennett will be the Master of Balls. Things that may happen could be ‘best dressed hipster shrug-off’, musical bingo, trying to say hipster phrases while having an unholy amount of marshmallows in your mouth, ‘real hipster band or fake hipster band’, and amongst other things maybe some actual bingo (but, with none of the “right” calls). Plus, we’ve got the fabliss Workman’s Club Comedy Club taking over The Vintage Room in The Workman’s Club! If you’ve got a hankering for awesome stand up and a belly full of laughs then we’ve got ya sorted. We’ll be bringing you some of the most hilarious and interesting acts in the country. Hosted by two legends of the Irish alternative comedy scene, Ruth Hunter and Conor O’Toole, you’ll be having the lolz in no time.  (8pm)

Over in The Liquor Rooms we’ll have a cocktail masterclass kicking off at 6pm. Fancy shaking what yer mama gave ya and learning how to mix a mean drink? Email beibhinn@theliquorrooms.com for deets!

So, there you have it. 3 days of deadly music, laughter, food, wings, lolz. ALL FOR FREE. Like Chandler says, it couldn’t BE any better. 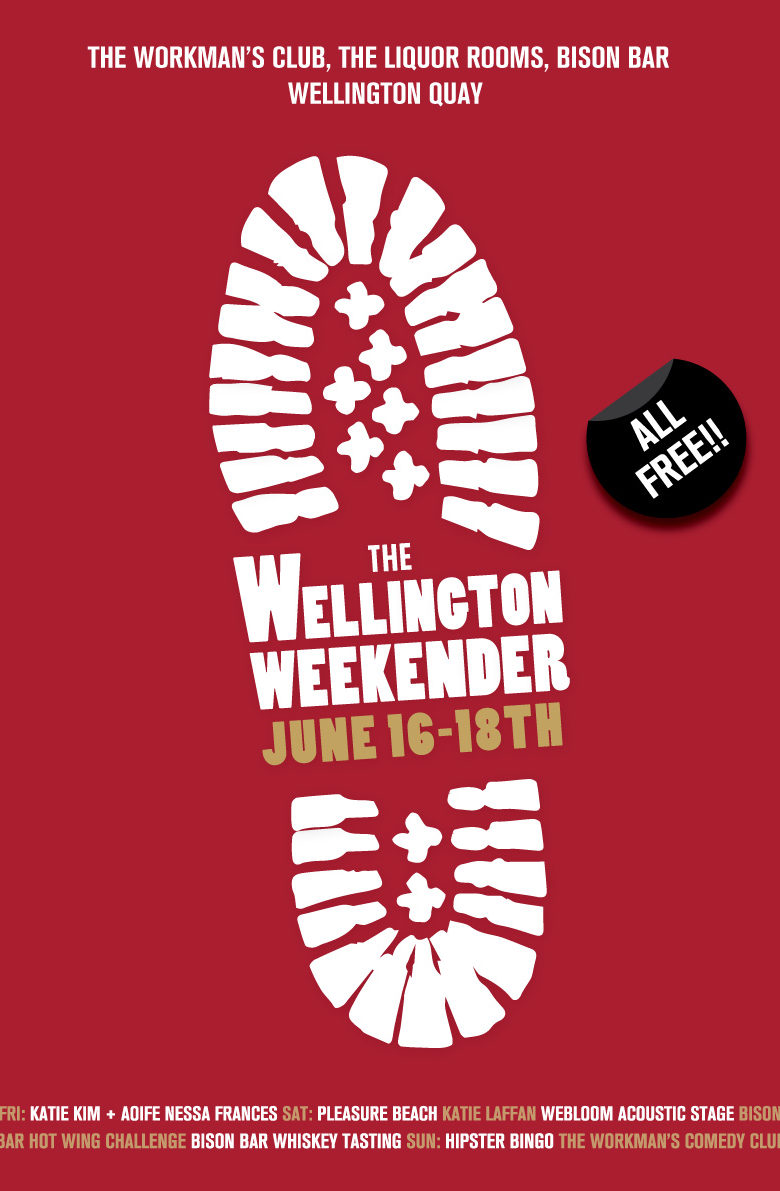