“Karen Dalton and Joanna Newsom melt together in the form of Gaelynn Lea and set about absolutely obliterating your heart.” -Dan Auerbach (The Black Keys)

“The way her voice resonates is so unusual and beautiful, like nothing I’ve ever heard before.” -Jess Wolfe (Lucius)

Gaelynn Lea was given the opportunity of a lifetime when she won NPR Music’s 2016 Tiny Desk Contest. More than 6,000 artists submitted videos in which they performed an original song behind a desk of their choosing with the hope of winning a chance to play a Tiny Desk concert at NPR. Gaelynn Lea was the overwhelming favorite of the six judges. and Gaelynn Lea certainly made the most of it. She and her husband Paul quit their jobs, sold their house, bought a van, and hit the road.

Since they left just over a year ago, Gaelynn has played over 200 shows in 39 states and 6 countries. She has performed in the widest variety of venues imaginable – coffee shops, bars, music festivals, elementary schools, nursing homes,colleges, The House of Blues, Music City Roots, The Kennedy Center, The State Department and even BBC World News.
This tale of adventure wouldn’t be particularly remarkable if the music failed to deliver. But Gaelynn Lea has developed a “stop you in your tracks sound.” (Bob Boilen, All Songs Considered) Playing traditional fiddle music and original songs using her violin and a looping pedal, Gaelynn Lea’s “music is imbued with a melancholic poetry so potent it must be heard to believed.” (Isaac Feldberg, Boston Globe)
Gaelynn Lea performs from her electric wheelchair. She began playing violin 20 years ago after a creative music teacher helped her to adapt a playing style that suits her frame. Lea holds her instrument like a tiny cello and loops her classically trained rhythms and melodies “to create a symphonic cacophony that is both glorious in its reach and profoundly introspective”. (Collins de la Cour, Ear to the Ground) Her original songs explore the contrasting nature of existence – dark and light, birth and death, anger and forgiveness, sorrow and joy. Gaelynn Lea’s live performances can be overwhelmingly soul-stirring – Bob Boilen reported that “there was hardly a dry eye” at her 2016 Tiny Desk Concert. However, she is not all seriousness during her shows. In fact, Gaelynn is disarmingly charming onstage, “at once self-deprecating and plain spokenly funny”. (Chris Riemenschneider, Star Tribune) She regales the audience with humorous anecdotes in between songs, putting those in attendance at ease.
Although the past year has been spent mostly on the road, Gaelynn Lea has somehow found the time to work on her fourth studio album; If Only Love Would Be Our Guide is expected to be released in September 2018. It is an eclectic collection that runs the gamut sonically – from pensive to luscious to aggressive to decidedly pop – and if that’s not enough variety, there’s even a Finnish fiddle tune! The connecting thread of this album is Gaelynn Lea herself – a singular voice and violin guide the listener on a journey which touches on some of life’s greatest mysteries.

The structure of these tracks made this album impossible to create alone, so Gaelynn Lea enlisted the help of some musical friends to bring her new album to life. This arrangement is quite a departure for Lea, who up until this point has crafted most of her music using only a few tools: a violin, a voice, and a looping pedal.Her band is comprised of several Minnesota heavy-hitters including Al Church, Dave Mehling, Marty Dosh, Andrew Foreman, and Alan Sparhawk. Their creative influence and musicality is evident on every track, though the band’s contributions never cover up or diminish the poignancy or presence of Gaelynn’s music. Rather the new album allows for a fuller, more complete expression of her heart and soul.

In addition to performing and recording, Gaelynn also loves to do speaking engagements about disability awareness, the power of music, and leading an enriching life. She has a congenital disability called Osteogenesis Imperfecta, or Brittle Bones Disease.

This will be a truly special show. Tickets are priced €10 go on sale on Tuesday, 28 November from Ticketmaster and Ticketweb.ie Doors 8pm 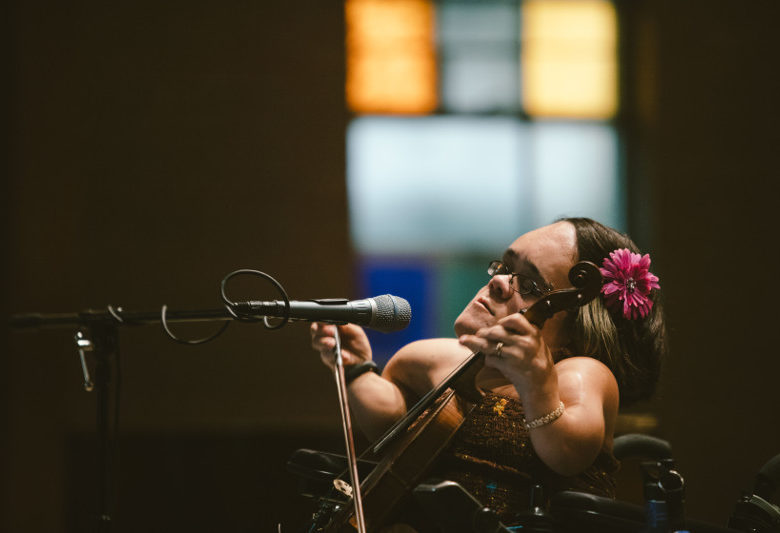