Halloween is a time for making some very serious life decisions. What sweets are the best value for money? What to dress up as? Is the ‘trick’ part of ‘trick or treat’ an empty threat? Where’s the best place to go for Halloween craic? Well, pull up a cobweb covered squeaky rocking chair, my friend. We can help you out with the last, and most important question. The best place to go for unbridled Bank Holiday Halloween craic is our gaff – although WE know that YOU know that already.

We love big party. We LOVE a Bank Holiday. We’re mad about deadly live music, awesome DJs. We’re also mad about YOU, which is why – as always – we are charging a very spooooooky NO EUROS to get in. That’s right, we’re bringing you all this fun for ZERO DOUGH.

On the live front, we’ll be hitting you with 3 great live acts. First up, James McGovern is a 22-year-old songwriter and musician who utilizes the tropes of rock and roll for his seriously emotive and sultry performances. In McGovern’s live shows the process of experience is at the forefront; the raw performance visually and sonically represents the originary states of grief, lust and despair which form the conception of his songs’ lyrics and soundscape. Whopper.

Next up, check out the savage Safari, a three piece Dublin based band. A broad range of influences have gone into creating the band’s sound, from 1960s surf music, through late ‘70s New Wave all the way to more recent indie rock bands. Having played gigs in Ireland and the UK, Safari has been fine tuning its set over the past few months and we can’t wait to hear them live on our stage!

Topping off our live acts for the evening – The Clockworks! These guys are a rabble-rousing, hook driven, Indie-Punk band from Galway. Their sound is inspired by the immediacy and angsty fervour of bands like The Clash and The Libertines, as well as the observation and kitchen-sink storytelling of bands like The Smiths and The Streets.

2017 so far has given the band National radio playlisting for their 4 singles, a

number of packed out gigs across the country and in London, and a storming set at Electric Picnic.

After the live music is finished the party will KEEP going. As is the case every Sunday, once the live acts are finished, The Karaoke Club takes over. Grab the mic and sing to your heart’s content ‘til all hours. Do the Monster Mash?

Upstairs from 11pm, we’ve got a mad-load (that’s an official unit of measurement, you know) of DJs poised and ready to spin some sweet beats. In 9 Bar, we’re bringing ya THEN#21! With Sir Liam of Gallagher performing in Lucan earlier in the night, we thought it only right to have THEN take over the 9 Bar. THEN is Dublin’s only All Manchester Music Gathering – and 29th October marks its 21st night in business. If any of you hit Garage Bar after Liam Gallagher’s Olympia performance a few months back, you’ll know exactly what to expect – Manchester Music Anthems all night long! Safe!

Upstairs to the right, as per every Sunday,  expect a raucous set of 80’s, 90’s, 00’s Guilty Pleasures by the most debonair Edward Porter.

So, there you have it. A scary amount of fun for an even scarier NO QUIDS IN. Plus a Monday banker to relax. BOOM. Come join us! 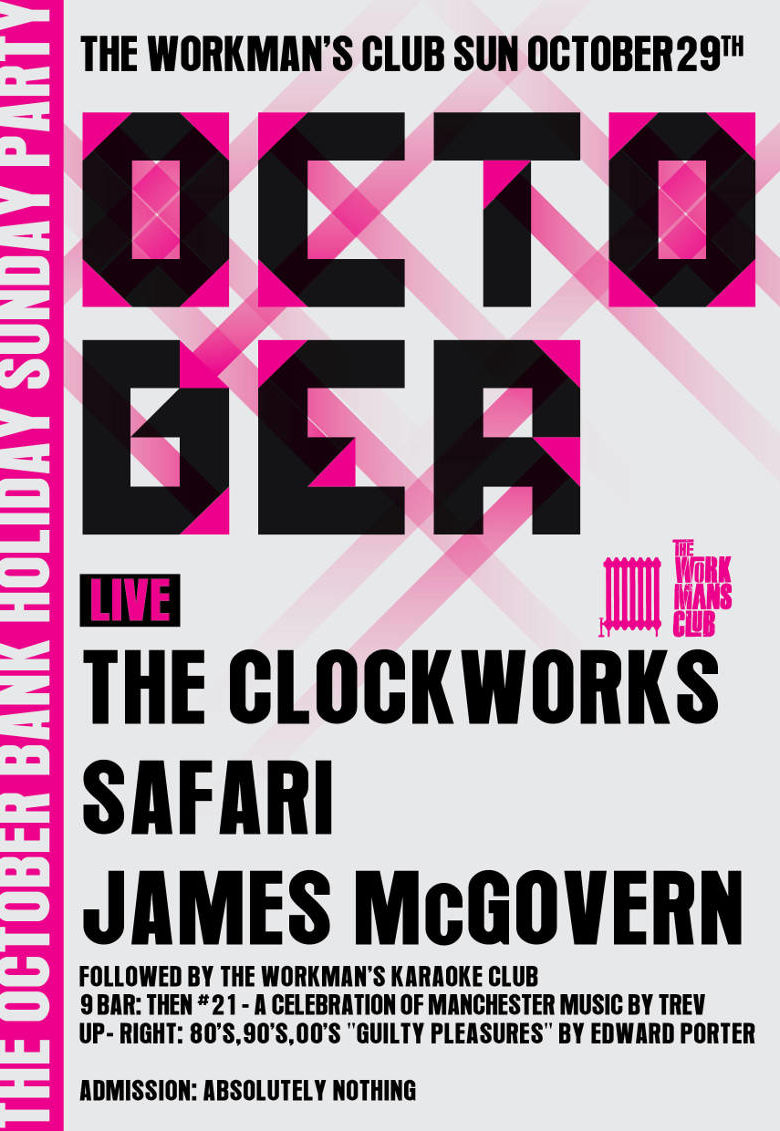