THIS IS THE ONE

OK, so let’s paint the picture for you. It’s Saturday, 9 July. You’ve been at The Stone Roses in Marlay Park. The gig is over but the night most certainly isn’t. What to do? Well, c’mere to us til we tell you! THEN, Dublin’s Only All Manchester Music Night takes over The Workman’s Club & Garage Bar to keep you dancing ‘til all hours!

Getting the night started in The Workman’s Club will be Workman’s resident and fellow Manchester music fanatic, Rob Smith! We’ll also have the deadly Marquis D’Alton playing a Hacienda themed set before we welcome the one and only Dave Haslam to the stage!

Birmingham born DJ and author Dave Haslam has DJ’ed over 450 times at Manchester’s legendary Hacienda. He was at Joy Division’s last show in 1980, Sonic Youth have slept on his floor and Tony Wilson threatened to shoot him. He recently published his 4th book, Life After Dark: A History of British Nightclubs & Music Venues. Dave also opened for The Stone Roses at their stuff-of-legends, historic gig at Spike Island. He also curates exhibitions, gives lectures and is an all ‘round legend of the scene. You won’t wanna miss his set!

PLUS, because we love you very very much, we’ll also be bringing you what is most DEFINITELY going to be an awesome set from none other than Ms Manchester herself, Rowetta.  Best known for singing with Happy Mondays, she’s also performed with Peter Hook & The Light – and played herself in the brilliant movie 24 Hour Party People. She’ll be picking out her favourite Manchester anthems – and singing a few too!

The trifecta is complete with Trev, the Then Founder and Workman’s Resident. Trev has warmed up Main Stage Performances for the likes of New Order (Forbidden Fruit 2012), Primal Scream (2013) and The Charlatans (Leopardstown 2014). Over the years, he has also DJ’d alongside Mani (The Stone Roses), Shaun Ryder and Bez (The Happy Mondays), Andy Rourke (The Smiths), Tom Hingley (The Inspiral Carpets) and even played at Morrissey‘s end of tour party in Dublin 2011. Those are some serious Manchester credentials right there!

Meanwhile over at Garage Bar the Reverend Tony Bones will deliver his very own Retrospective of Manchester Music.

AND, as if this line up couldn’t get any better, this whole shindig will be absolutely FREE.

THIS IS THE ONE 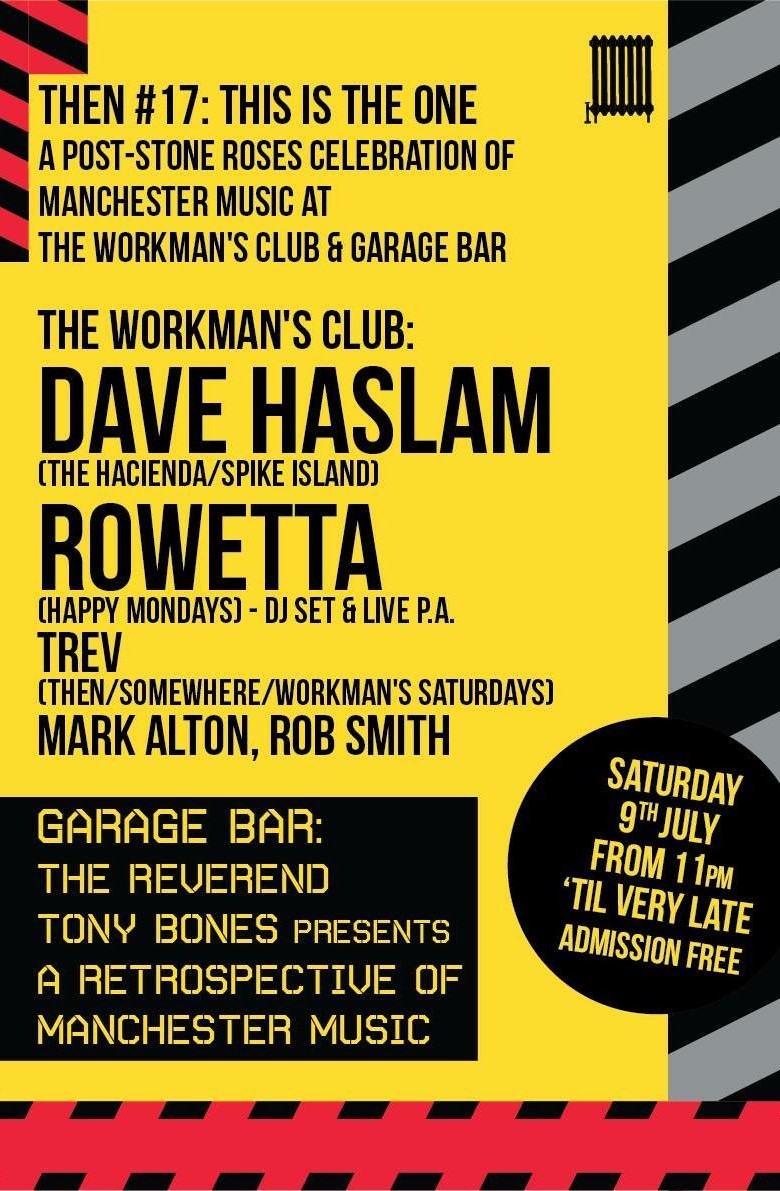