THEN#22
The Workman’s Club
Friday 15 December

With Happy Mondays in town performing at Vicar St, the good people of THEN – Dublin’s Only Manchester Music Night, will be keeping the party going in their own very unique way by taking over The Workman’s Club Venue on Friday, 15 December.

The 22nd instalment of THEN will feature the First Lady of Manchester, ROWETTA of Happy Mondays fame, on tune selection AND live vocals. If you were lucky enough to hit THEN, following The Stone Roses gig last summer, you know that she should not be missed. Whilst best known for singing with Happy Mondays, Rowetta has also performed with Peter Hook & The Light – and played herself in the brilliant movie 24 Hour Party People. She’ll be picking out her favourite Manchester anthems – and singing a few, too!

Joining Rowetta on the night will be THEN founder and Workman’s Club resident, TREV. Trev has warmed up Main Stage performances for the likes of New Order (Forbidden Fruit 2012), Primal Scream (2013) and The Charlatans (Leopardstown 2014). Over the years, he has also DJ’d alongside Mani (The Stone Roses), Shaun Ryder and Bez (The Happy Mondays), Andy Rourke (The Smiths), Tom Hingley (The Inspiral Carpets) and even played at Morrissey’s end of tour party in Dublin 2011. Those are some very serious Manchester Music credentials right there.

Just to make it eeeeeeeeven more inviting, there’s NO charge on the door. That’s right, if you want to keep the Manchester party dream alive after Vicar St, head on down to us. If you missed the Vicar St show, but don’t wanna miss out on some deadly Manchester tuneage, come on in. We’re charging zero quid. 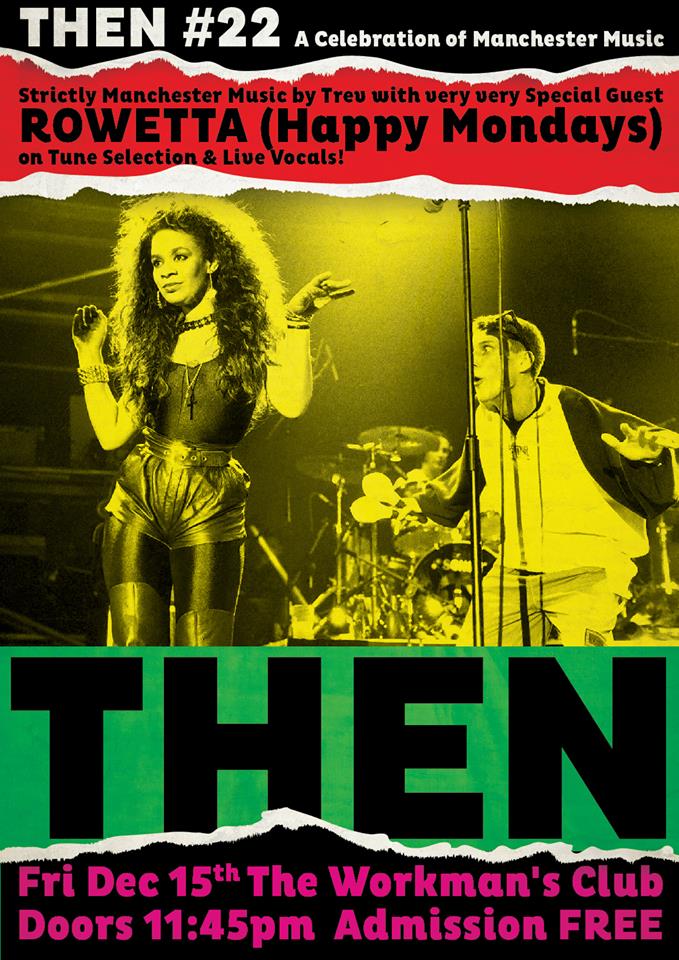