The revolutionary records and iconic artists that shaped jazz.

WAX ON is both a listening party, placing the needle in the groove of a collection of favourite jazz albums, as well as an intimate space for story-telling and reflections.
One of the most respected names in contemporary jazz, Wayne Shorter is also one of its most vital and creative forces; a saxophonist whose compositional portfolio has made a profound contribution to modern music.
Wayne Shorter is in many ways the personification of modernity. His restless approach to playing, his philosophical perspective on life and his treatment of his own works has made him a daring figure and a much admired man. Though some will argue about whether Wayne Shorter’s primary impact on jazz has been as a composer or as a saxophonist, no one can dispute his overall importance as one of jazz’s leading figures.

As a composer, he is best known for carefully conceived, complex, long-limbed, endlessly winding tunes, many of which have become jazz standards yet have spawned few imitators.

From his Blue Note years, and through his work with Miles Davis and Weather Report, Shorter continually re-cast the high watermarks for jazz composition with original tunes such as JuJu, Yes or No and Footprints. Now, at 84, Shorter continues to play and compose, forming supergroup ‘Mega Nova’ in 2016 with pianist Herbie Hancock and guitarist Carlos Santana. His commitment to excellence is underscored by his numerous accolades and awards, winning no less than nine Grammys for best instrumental composition, solo and performance.

Moderated by Irish Times music critic Cormac Larkin, with a panel of jazz aficionados, Wax On brings the audience on an intimate journey through the life and recordings of some of the most influential and important artists of the jazz genre.

Venue: The Vintage Room upstairs in The Workman’s Club, Dublin. 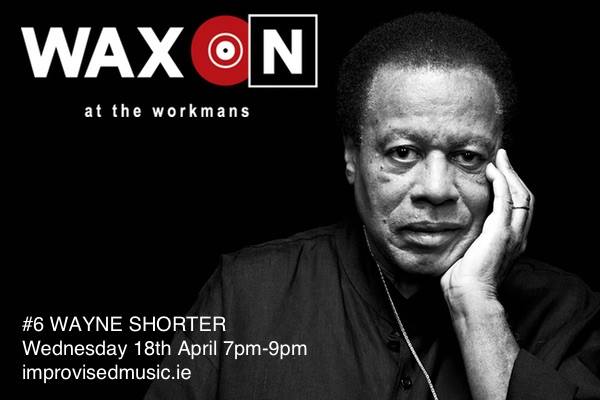