The revolutionary records and iconic artists that shaped jazz.

WAX ON is both a listening party, placing the needle in the groove of a collection of favourite jazz albums, as well as an intimate space for story-telling and reflections.

The 7th WAX ON event will focus on the life and music of pianist and composer DUKE ELLINGTON!

An originator of big-band jazz, Duke Ellington was an American composer, pianist and bandleader who composed thousands of scores over his 50-year career.

A major figure in the history of jazz music, his career spanned more than half a century, during which time he composed thousands of songs for the stage, screen and contemporary songbook. He created one of the most distinctive ensemble sounds in Western music and continued to play what he called “American Music” until shortly before his death in 1974.

Ellington composed on trains and tour buses, then developed his sound with soloists on late-night jams in hotel rooms. It has been said that he wrote music the way a journalist – rather than a novelist – produces words: on the hoof, against a tight deadline, and with the objective of creating intense and vivid impressions of briefly-visited places, short liaisons and passing moments.

Ellington’s sense of musical drama and of his players’ special talents and his wide range of moods were rare indeed. His gift of melody and his mastery of sonic textures, rhythms, and compositional forms translated his often subtle, often complex perceptions into a body of music unequaled in jazz history.

Moderated by Irish Times music critic Cormac Larkin, with a panel of jazz aficionados, Wax On brings the audience on an intimate journey through the life and recordings of some of the most influential and important artists of the jazz genre.

Venue: The Vintage Room upstairs in The Workman’s Club, Dublin. 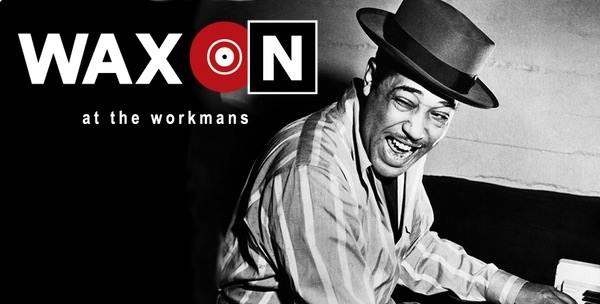