Be Curious, Kid are 3 piece instrumental Post-Rock band who met while studying music in college and bonded over a mutual love for ASIWYFA and loud noises. Their last year has been spent gigging extensively around Dublin and honing their live show as well as releasing their debut single ‘Gun Running For Gandhi’. A collective of orchestrators that make music that sounds like a bucket of wrenches falling on a tin roof.

“moon looks on” are an Irish band based primarily in Dublin,known for their high energy shows and never faltering live performances.Their sound encompasses a fusion of both modern contemporary folk and soul, with little dabs of reggae, blues, country and pop. The bones of the music are built around the songs told as stories and then layered on a pulsating bass and drums backline, then weaved together with the harmonically and melodically rich sound of violin and piano playing counterpoint to one another.

Alex Smyth is an Alternative Instrumentalist from Dublin. Listen to his debut single CXCVII, his influences include TYCHO/THEAMERICANDOLLAR/THISWILLDESTROYYOU/BENHOWARD/MMX/HELIOS 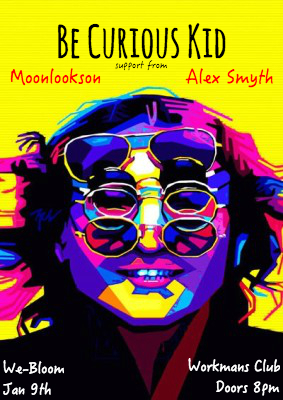