Youth workshop: How to organise for the Climate Strike in school

Join us on Saturday 7th September in the Vintage Room (the Workman’s Club, upstairs) for discussions on:
– ‘How to stop capitalism from burning the planet?’
– ‘Action strike committees in secondary schools: why and how to organise them?’

Climate change poses a major risk to the world that we all live in – we now have less than 10 years before the effects of climate change are irreversible! Politicians like Leo Varadkar have said that climate change can be tackled by changing our own individual behaviour – recycling more etc. The real problem, however, is the role of big business and the market system that capitalism is based on.

What can school students do? Strike against climate change!

. Support and join the international call for strike action on Friday 20th September! Let’s organise national school strikes and mass demonstrations with speeches to introduce the next steps of the movement.

. Organise locally! Let’s build momentum. Like in Belgium or Germany, where strikes have been a real source of inspiration, strike committees led by students should be organised in schools, to give a lead to actions and activities. Join us for a workshop on how to organise a walkout in your school on 7th Sept.!

. Reach out to workers and Trade Unions! Greta Thunberg has made the call for a general strike against climate change, that would mean all workers striking and bringing the country to a hold. Teachers and workers should be prepared to follow the action, and put pressure on their Trade Unions to organise and give a lead. Millions of workers could be easily mobilised through trade union structures and if the workers stop working, the world stops working. Mobilising their power behind the lead of young people is key to really challenge the rule of capitalism.

. Organise around a real programme! For all students to discuss a programme and vote on the key aspects of it.

. Nationalisation of oil and gas industry – for an end to fossil fuel industries and a shift to renewable energy!

. Corporate tax, not carbon tax! – for the end of profit before the planet, the end of big polluting corporations and the end of taxes on the poor and working class. We shouldn’t have to pay the price of the damages caused by profiteer businesses.

. Trade Unions to organise workers and join the strike action! – all together, we can shake and challenge this profit driven system.

. Socialist change, not climate change! – workers and young people can organise internationally to defeat capitalism and establish an economy that is publicly owned, democratically run and planned in the interests of our planet in the next 10 years. This would tackle environmental disaster and all forms of oppression and inequalities perpetuated by the capitalist world we live in. 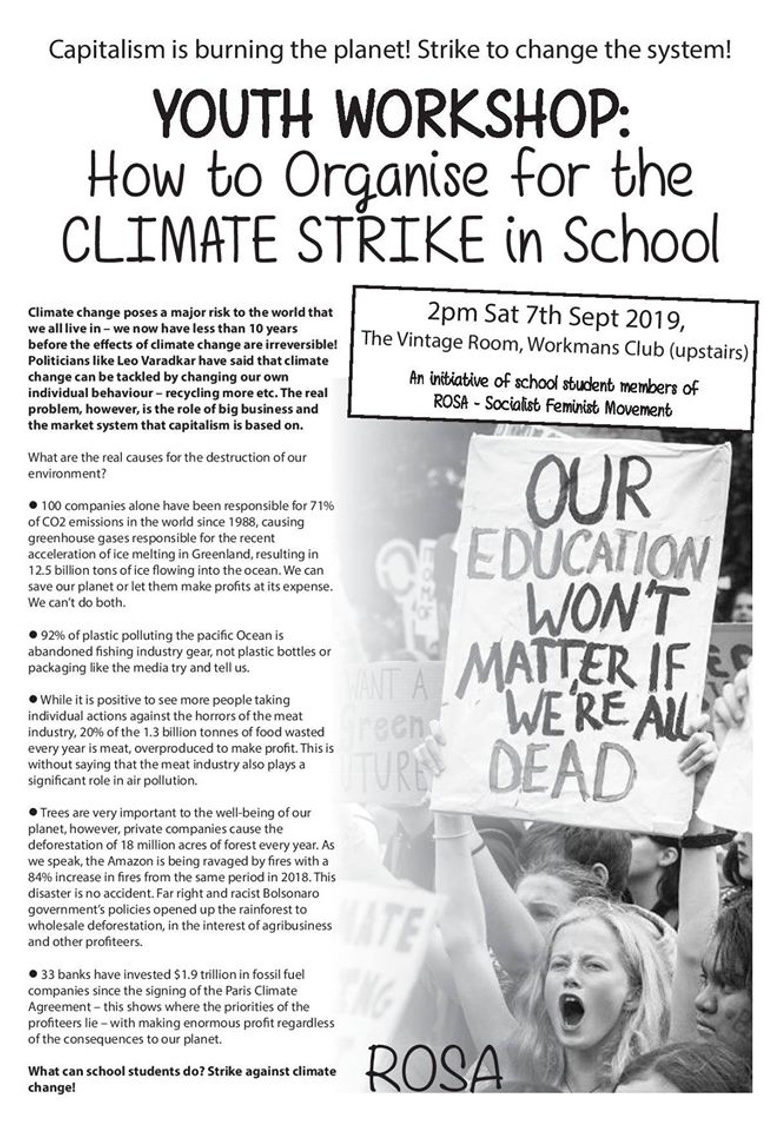