Don’t say we don’t spoil ya. We love an auld Banker Sunday for ourselves and we also love a good party with deadly live music, so here’s what we’re putting on for you. Oh, and once again, we’re bringing this to you for no dough. T’is all FREE!

Live from 7pm we’ve got 4 bands that are set to make your Sunday anything but sleepy. First up, we have Fontaines, a five-piece, Dublin based band Influenced by 80’s British alternative and rock n’ roll. John Robb from Louder Than War said Fontaines ’‘have created a rock n roll so pure and thrilling that it sounds like a breath of fresh air.’

Right after that we’ve got the wonderous Fiction Peaks. This 4 piece began life in 2013, playing shows in their hometown of Dublin and across the country. They make a heady mix of alternative rock with an indie pop tinge and an electronic 80’s feel with effects boxes, drum machines, synthesizers and backing vocals. They’re getting ready to release their debut EP this summer and we reckon (read: KNOW) that you won’t want to miss these gents!

If space metal is your thing then set your faces to YES for Wild Rocket. They play heavy psychedelic punk and having released their debut album Geomagnetic Hallucinations in 2014, they continue to thrill their audiences into 2015. They’ve got percussion and a machine for creating synthetic sounds and two flavours of stringed instruments, one high one low. They promise to ‘expand even more consciousnesses into eternity’ and we believe them.

Finally, we are over the moon to announce that we have the awesome TAU headlining our slew of brilliant live music. TAU is the Berlin based outfit spearheaded byShaun Mulrooney, live organist and percussionist for Dead Skeletons and former frontman of the now legendary Humanzi. This project is a collage of ideas and trance-induced soundscapes and comes from a lineage of those who are influenced by the psychedelic/psycho-active experience. Open, collaborative and based around jams and call and response mantras, the band can vary from city to city, country to country. TAU, Dublin will feature members of Twinkranes and Exploding Eyes.The debut EP will be released on Fuzzclub in July

We’re topping off all that live music with a special Banker Sunday shaped cherry in the shape of The Workman’s Karaoke Club and First Floor 80’s, 90’s andNoughties Guilty Pleasures by charmers Colin Devine and Edward Porter. 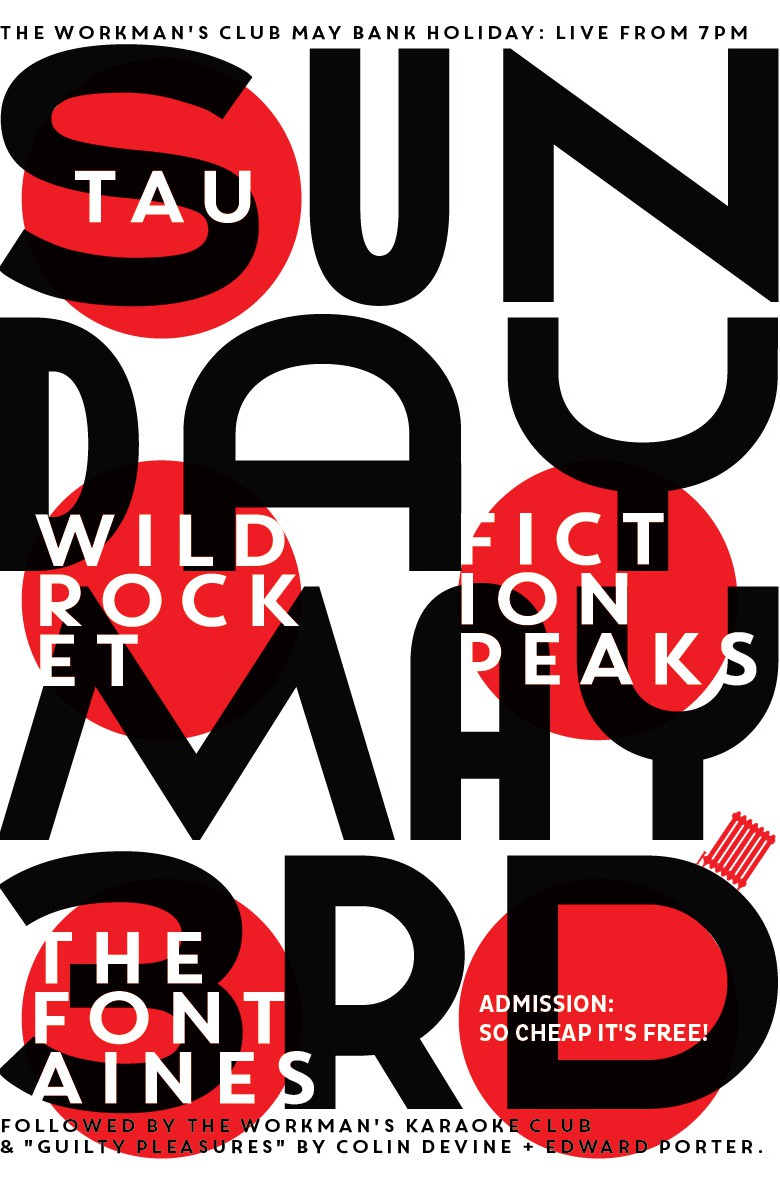